The Friends of Sompting Church is registered in England and Wales as a charity; number 285958. 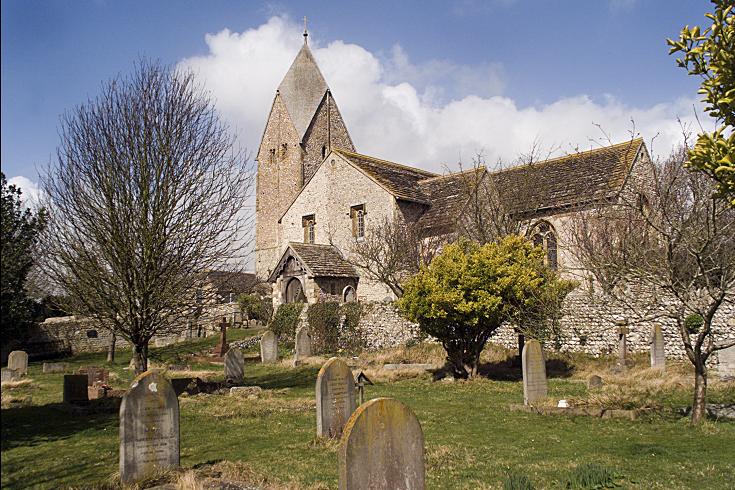 There’s been a church at Sompting since before the Norman conquest of the 11th century. The oldest part of the building is the Saxon Tower, which has stonework that has been dated as pre-1000AD.

The Tower and Spire

The Saxon Tower, now standing around 25 metres high with walls 76cm thick, is thought to have been built in stages. The first stage, which was probably once the west end of the Nave (the central part of the church), is believed to have been constructed before 1000AD. The second stage dates from approximately 1050AD, with its Romanesque architectural features providing additional evidence for the dating.

The spire is the earliest example of a ‘Rhenish helm’ in England. The framework is square, with a four-sided pyramid rising to a central mast. The helm was re-shingled in 1984, which offered the opportunity for a detailed study. Samples of the timber frame were sent for radio carbon dating and tree-ring dating, identifying the wood as 14th-century oak. It is likely that this wood was a replacement of earlier work, because the original tower construction shows a shape that is consistent with the Rhenish helm.

There are currently two bells in the tower, although there were four bells present until 1724. The smaller bell, which is inscribed I.W. 1723, was placed there in 1898. The larger bell bears the inscription Jno. Rudhall, Gloucester 1795, although it has been recast since originally being manufactured.

The Nave of the church, which is the main part of the building leading towards the altar, is predominantly 11th century. The north and south transepts were added in the 12th century by the Templars. The roof was originally a medieval Crown Post design, but this was renewed in the 1850s using Baltic fir and Horsham stone slabs.

Some of the architectural features have confused historians; for example, the square-headed perpendicular windows in the Nave date from 1827, although they have eroded to give the appearance of 15th or 16th century features.

Similarly, there is a 12th century doorway, with carvings on 11th century stones showing a 13th century depiction of Christ in Majesty surrounded by the symbols of the four evangelists. The stones were placed here in 1910.

Evidence of an 11th century window in the south wall suggests that the Templars may have rebuilt the wall using Saxon designs or by retaining much of the original wall.

The North Transept contains traces of a Norman window and a 14th century blocked door. The east wall was rebuilt in 1854, with the vaulted roof stemming from an unusual support (corbel) that has a face – sometimes referred to as a Saracen’s head.

The South Transept, which is lower than the rest of the church, was built in the late 12th century as a private chapel for the Templars. Signs of mediaeval fittings were noted in 1830, shortly after alterations (including an arch from the Nave) were introduced. The arch in the South Transept was modelled on the 12th century arch to the North Transept.

The font, moved from the west end of the Nave in 1827, has a 12th century Norman Sussex marble bowl. It originally had an elaborate 15th or 16th century cover, although this has now been lost.

The porch was added in the 16th century using 14th century materials, possibly from a former chapel. The bargeboard (to strengthen the roof) is a 14th century design, although it has been renewed.

The Chancel, which is the end of the church near the altar, contains the carved tomb of Richard Burré who died in 1527. The windows are 15th century, although remnants of 13th century windows are visible. A blocked 13th century arch can also be seen – this was probably either a priest’s door or a leper’s squint (for sufferers to watch a service from outside the building).

The sanctuary area contains a collection of reused Saxon carved stones. In 1974 the chancel floor, the tower floor and half of the south transept floor were replaced with Moulin a Vent French limestone. A 17th century tombstone is set into the chancel floor.

This multi-function room on the North side of the church was built in 1971 on the ruin of the 14th century Knights Hospitaller’s Chapel. An archaeological dig during the building work found an empty tomb and the pieces of a stone coffin lid. The grave is believed to be that of William Hyder, a Knight Hospitaller who died on 12th June 1524.

The patronage of St. Mary’s church was originally granted to the Knights Templar, giving them the right to become involved whenever a new priest was selected.

The Templars organisation was dissolved in the 14th century, with most of its property passed to the Knights Hospitaller. The Hospitallers had been founded as a religious order (the Order of the Hospital of St. John of Jerusalem) at the beginning of the 12th century to care for sick pilgrims and other travellers to the Holy Land. Later they took on additional military duties, working alongside the Knights Templar to protect pilgrims. Henry VIII disbanded the Hospitallers in 1548. In the 19th century a British Order of St. John of Jerusalem was set up to care for the sick, leading to the formation of the St. John Ambulance Brigade.

A parish archive of social, archaeological and architectural records is maintained by Judy Excell. Guided tours, local walks and school visits may also be available by arrangement.